This would end up being Frehley's Comet's last proper show as they had to bow out off the remaining dates for financial reasons. Both Tod and Ace remember this as being the last show on the tour (interview with metal-rules.com and No Regrets respectively). 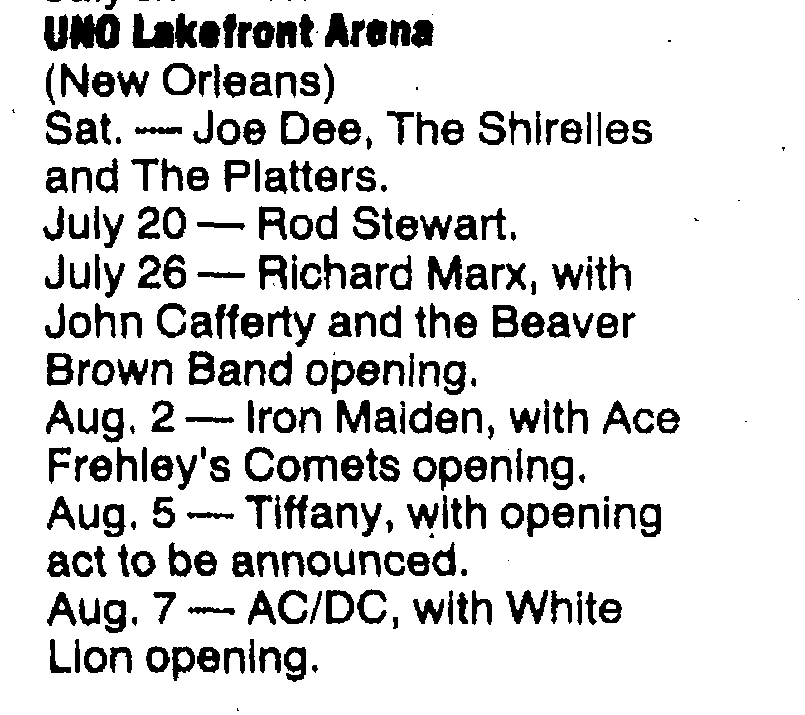 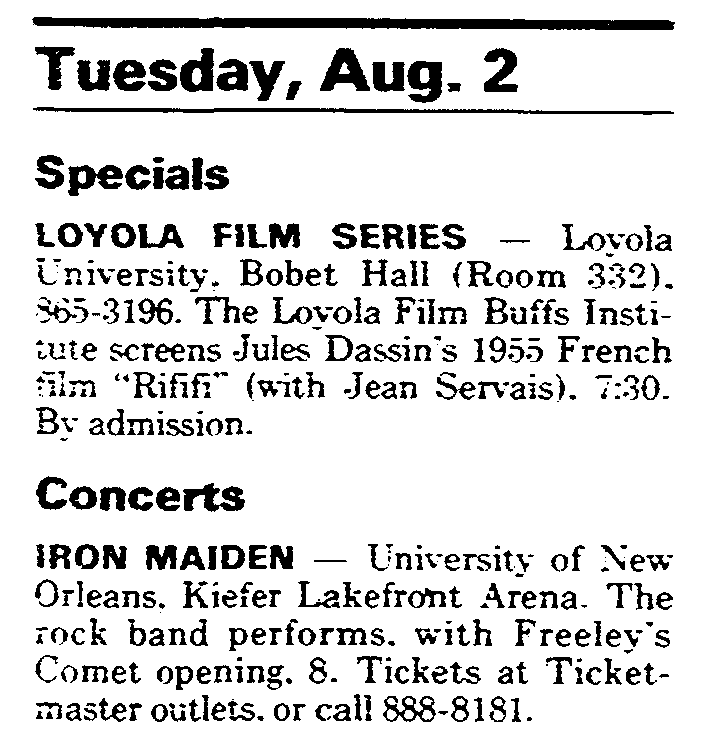 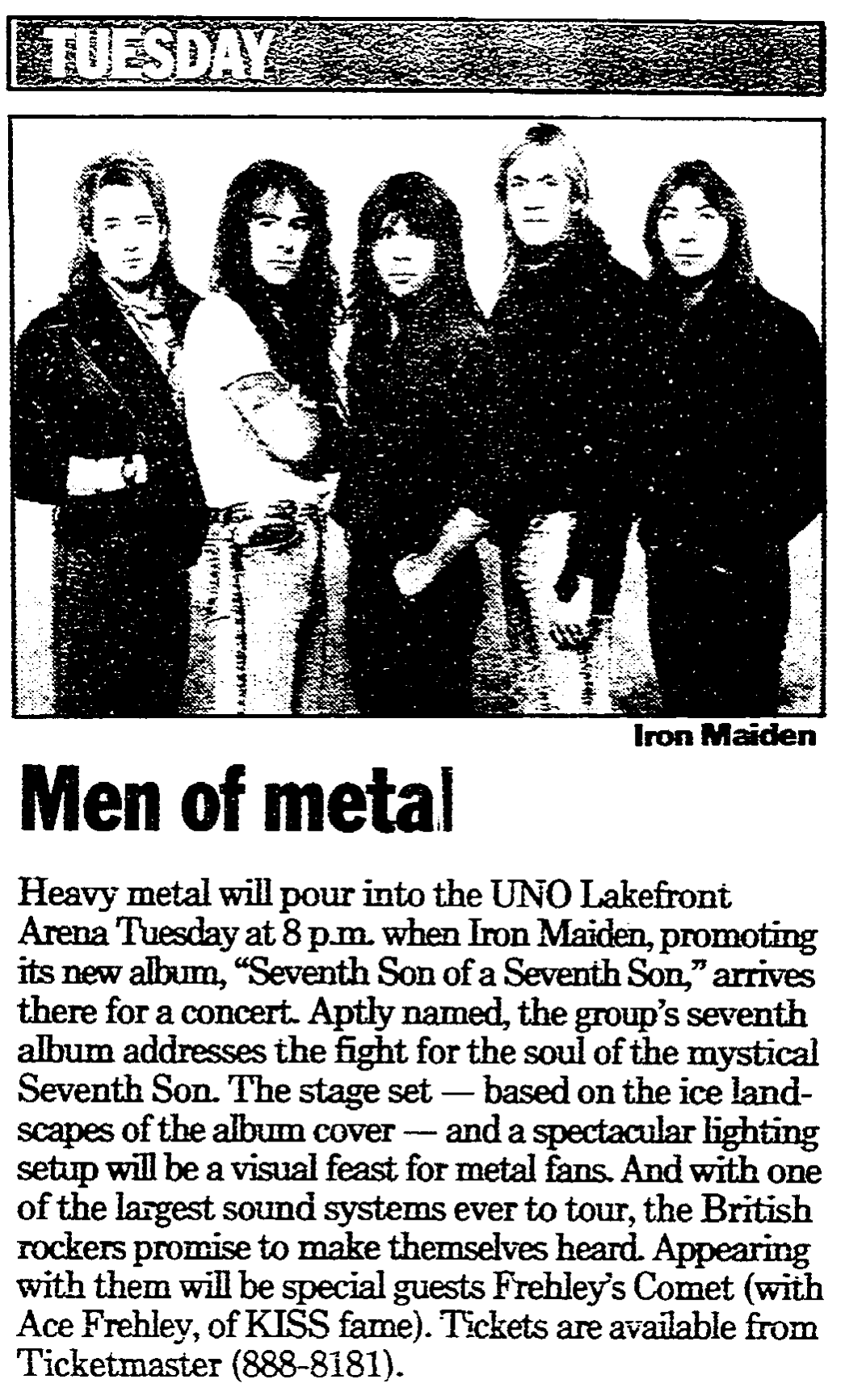 I've found no definitive proof of this but everything points to Frehley's Comet cancelling this show, especially the recollections of the members (see Notes for 88-08-02). The opening act comes courtsey Iron Maiden Commentary.

It's sad that Frehley's Comet didn't perform this show, I for one would be interested in hearing the last two song titles mentioned by the Orlando Sentinel. 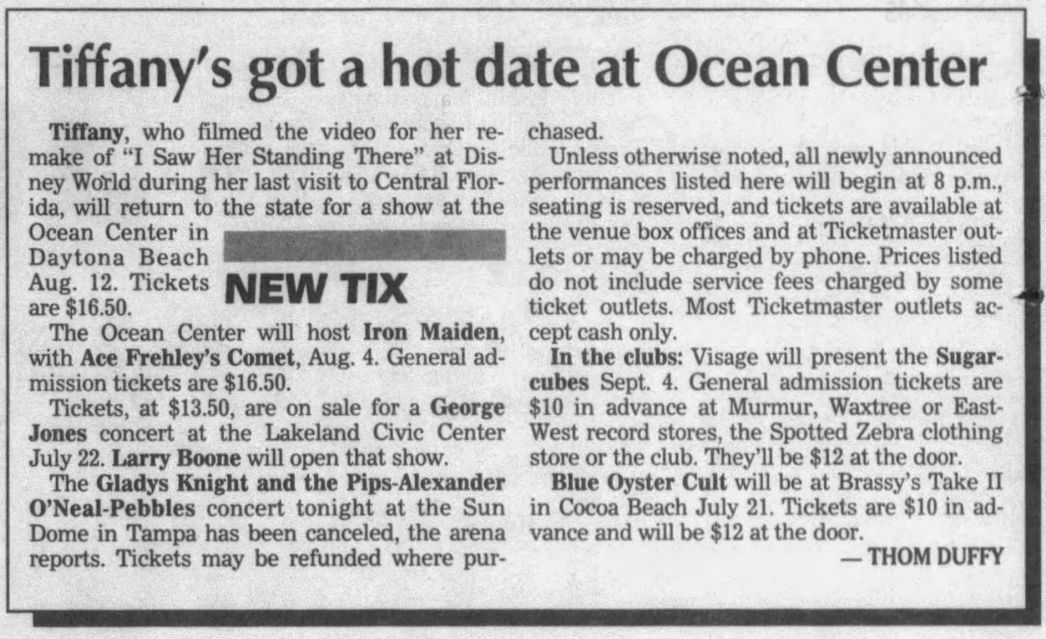 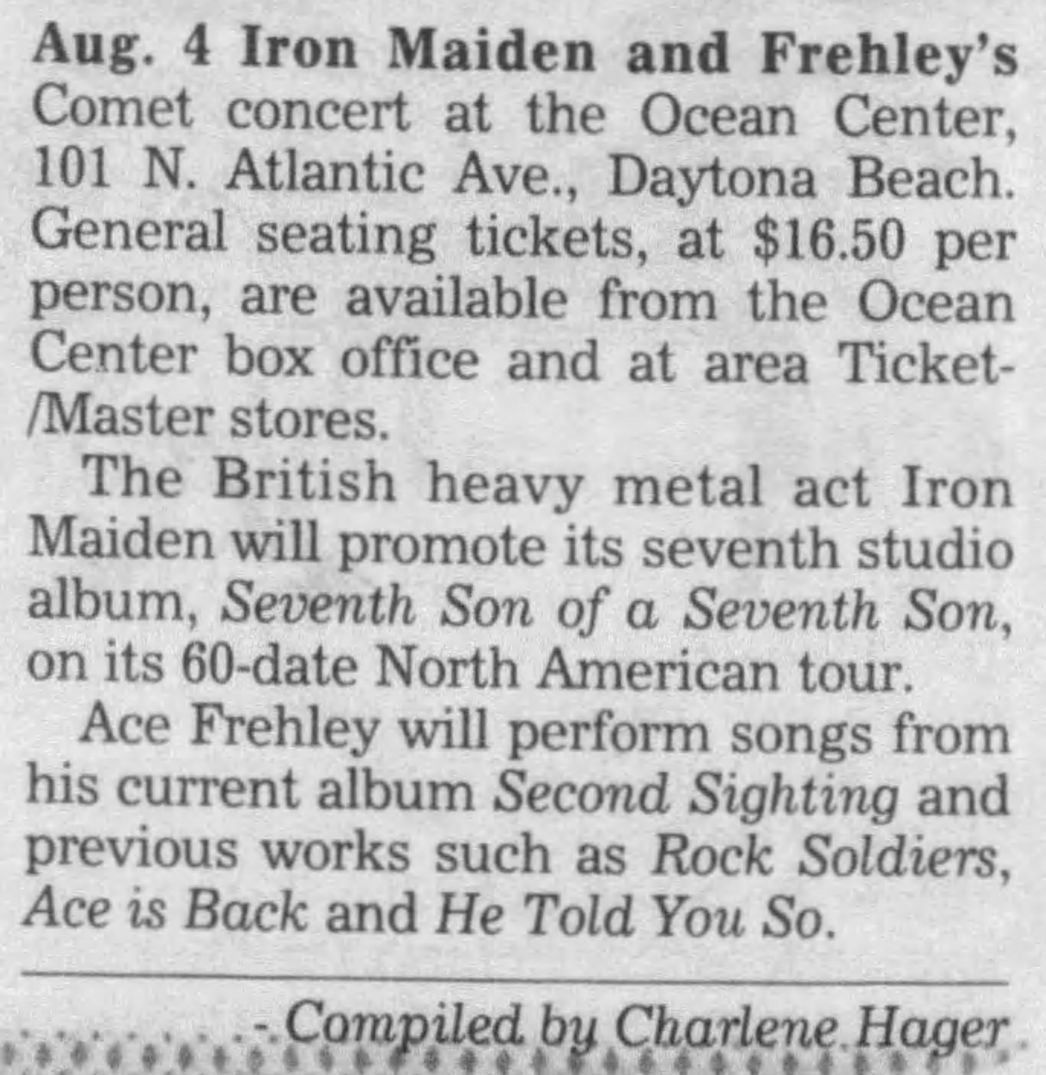 This show was originally noted in the papers as being scheduled for the then newly opened Miami Arena. Alas, this show, along with AC/DC scheduled for August 10, were moved to the Hollywood Sportatorium by early July, just before the Miami Arena opened.

According to Ron Cohen of Cellar Door Productions he had "mistakenly told [Miami] arena officials that Iron Maiden would play there, although the rock group had always been scheduled to play at the Sportatorium". (Fort Lauderdale News of Fort Lauderdale, FL 88-07-09, p. B-3) A small item in another paper noted that "the most plausible reason for the shift is poor ticket sales. The Sportatorium [is] smaller and less expensive to rent." (The Palm Beach Post of West Palkm Beach, FL 88-07-18, p. E-5)

A review by Jim Hayward mereley mentioned that "a local club band, Big Bang, filled in for opening act Frehley's Comet with only a few hours notice and did an admirable job". (The Palm Beach Post of West Palm Beach, FL 88-08-07, p. B-9)

Information on the replacement opening act comes from Iron Maiden Commentary. The fact that Frehley's Comet had canceled wasn't noted in the newspapers. 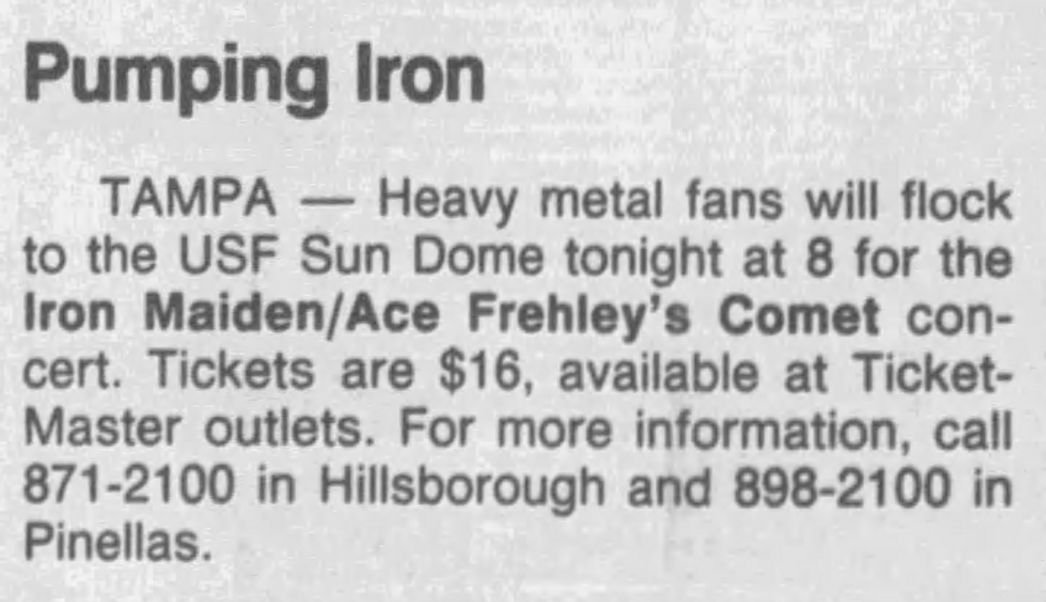 I wanted to include this because it was—as the newspaper clipping below shows—technically canceled before Frehley's Comet left the tour. The scheduling conflict was the previously canceled show at the Capital Centre in Landover, MD that was rescheduled to this date. Unfortunately not every news outlet got the message. 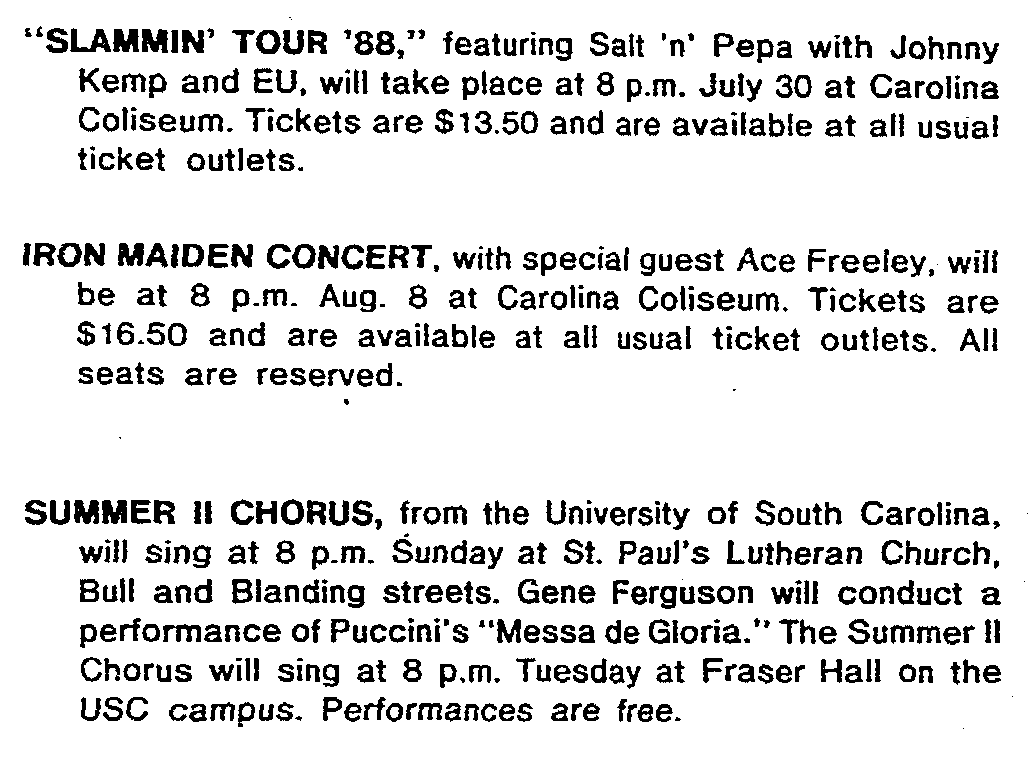 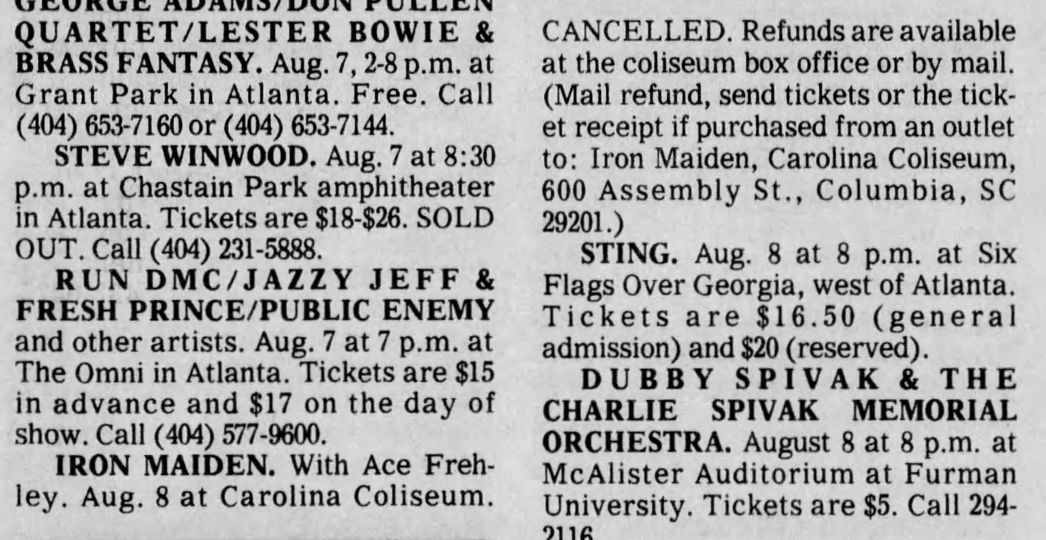 Re-scheduled from July 24. There were no less than three reviews of this show and neither of these even mentioned an opening act, let alone that Frehley's Comet had bowed out. The attendance figure comes from The Baltimore Sun (88-08-09, p. C-3), the Washington Times (88-08-10, p. E-23) had a more charitable figure of approx. 8,000. Information on the opening act comes courtsey Iron Maiden Commentary but must be considered tenative since that resource has this concert noted with an erroneous date.

The review in by Harry Crump in The Chapel Hill Herald (88-08-12, Friday section p. 4) noticed that the hall was "half-filled", bashed the opening act and failed to mention that Frehley's Comet were a no-show. 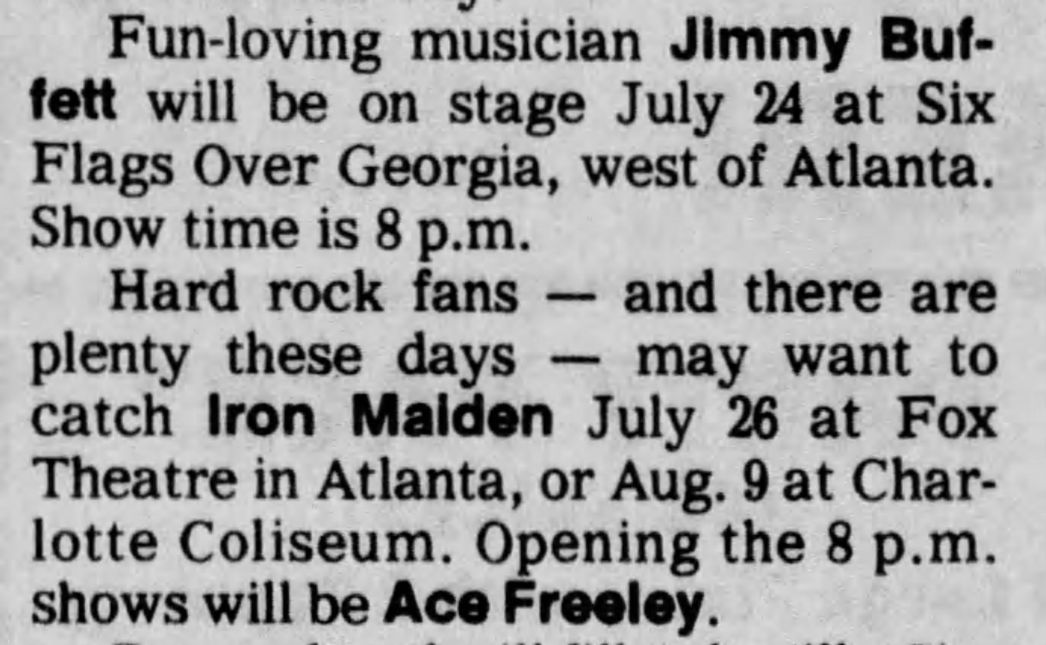 The attendance figure comes from Billy Warden's review in the Daily Press (of Newport News, VA 88-08-12, p. D-7), a review that failed to mention the opening act. 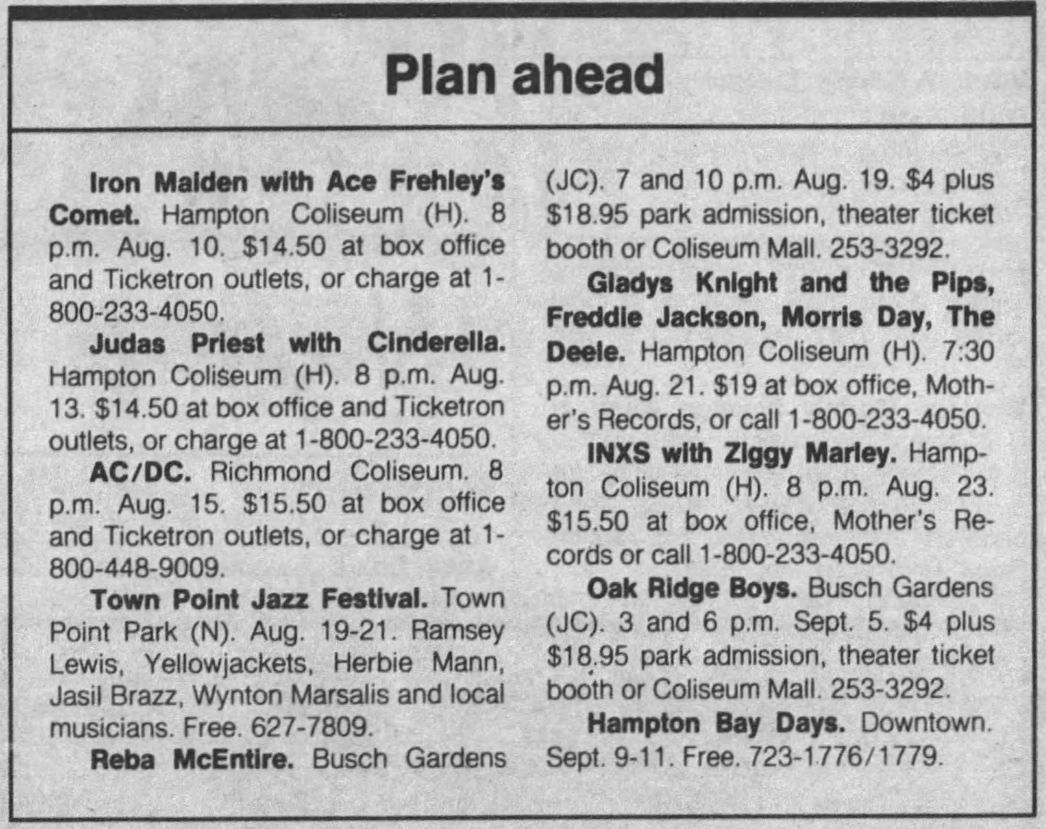 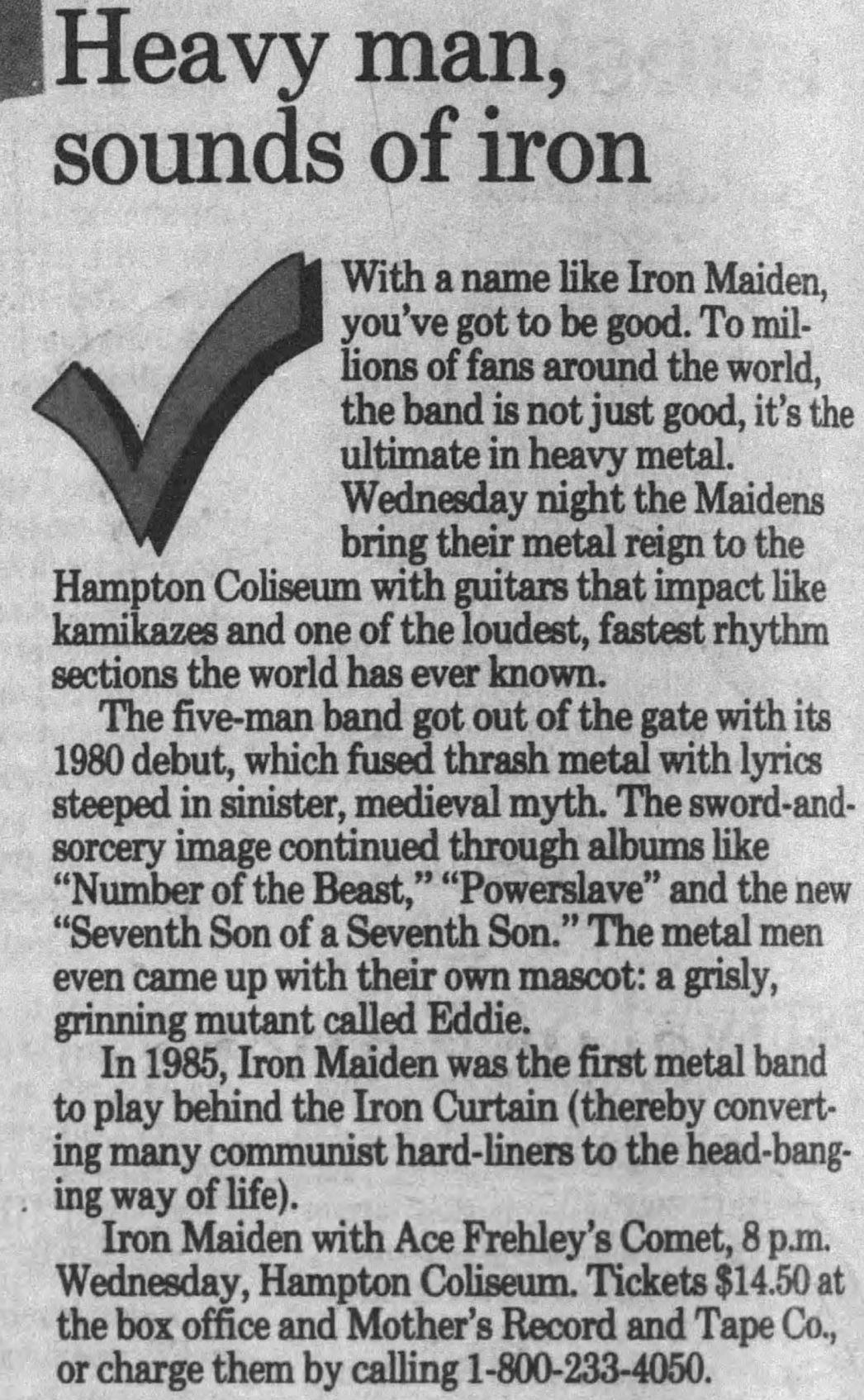